Save Broken Internet Connections with GetRight

This is the original feature that inspired GetRight to be programmed in 1997.
It is as valuable today as it was when GetRight was first written over ten years ago!

Even though many people now have high speed internet connections, the downloadable files have also grown in size comparable to these connection speeds. In 1997, when most people connected to the internet with modems, a big download would have been 4 or 5 megabytes (anything over 10 megabytes was considered HUGE). Today, those files could be downloaded very quickly with a cable or DSL connection, but many downloads today are several hundred megabytes, and gigabyte-sized downloads are not uncommon. (This was written in 2007, if you are reading this a year or two in the future, gigabyte-sized downloads may be quite normal and multi-gigabyte downloads may also be common!)

There are many causes of broken internet connections:

GetRight can solve these problems!
Downloads can be picked up and resumed right where they were stopped--whether that stop was intentional or not.

An example of GetRight saving a broken connection 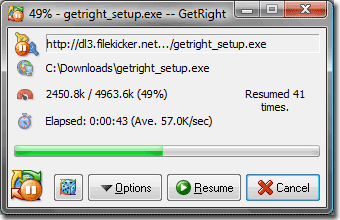 Hi. This is Peter writing; I designed this website and my brother, Michael, is the main programmer of GetRight.

Here is a test I did to show off GetRight's capabilities.

To the right is a screen shot of GetRight downloading its own installer.
During this particular download, I continuously pressed the pause and resume button, stacking up 40 disconnections and re-connections.

When I resumed the 41st time, I let the download start going, and then unplugged the computer's network cable!

On the 42nd resume (just after this screen shot was taken) I let the download finish.

Everything worked perfectly when I ran the installer.

When disconnections like this happen for real, GetRight can save you a lot of time and frustration!